The research of the Interfacial Electrochemistry Group focuses on two major directions that are related to (i) advanced metal electroplating for semiconductor applications and (ii) the development of novel Power-to-X (X = chemical feedstock or high density fuels) approaches that are relevant for the so-called energy transition.

Interconnect technology is certainly among the key technologies for the further development of high-performance logic and memory devices. The metallization of interconnects in the microprocessor fabrication relies nowadays on an additive-assisted metal electrodeposition processes (Damascene plating). One particular challenge in this context lies in the downscaling of feature sizes of the interconnect architecture. Smallest diameters of copper vias and trenches approach currently the sub-15nm regime and are going to be in the sub-10nm regime within the next 5 years. A second major challenge in this field currently lies in the defect-free and fast metallization of extraordinarily large µm-sized features, so-called 3D-TSVs (Through Silicon Vias) that will allow the three-dimensional integration of different components like sensors, memory devices and processor units on one single chip.

In collaboration with partners from the chemical industry (BASF SE, Ludwigshafen, Germany) the Interfacial Electrochemistry Group develops advanced interconnect metallization processes that are finally used in the semiconductor industry. A particular focus of our research lies in the development of novel screening procedures that allow for the identification of suitable organic additives which are essential part of the electroplating formulations.

An undesired side-effect of the use of plating additives is their embedment into the deposit during growth thus negatively influencing the device performance and life-time. In collaboration with the Physics Department of the University of Bern (Prof. Dr. Peter Wurz) and colleagues from the IBM Zurich Research Laboratory in Rüschlikon (Dr. Emanuel Lörtscher) novel analysis techniques are developed for the quantification of trace impurities in these electrodeposited interconnect features. These advanced analysis methods are based on femto-second laser-ablation mass spectrometry (LIMS).

It is generally accepted that CO2 plays a vital role as a green-house in Earth’s climate. There is today a consensus that the observed huge increase of the atmospheric CO2 concentration is due to anthropogenic sources such as the burning of fossil fuels and the deforestation of land. It is evident that natural buffers (oceanic absorption and the photosynthesis of plants) cannot fully uptake the enormous amount of human-generated CO2, and that the balance of Earth’s atmospheric CO2 cycle is broken. To preserve our environment from the consequences of global warming and other effects linked to anthropogenic CO2 emissions is one of the greatest challenges facing our society today. What is called the “carbon dioxide problem” is complicated by many technological, economical — and sometimes even political— factors, such as the constant push for economic growth, the increase of the world’s population and our reliance on fossil fuels. As a result, a number of technologies including capture and sequestration have been devised in order to reduce the levels of CO2 in the air. 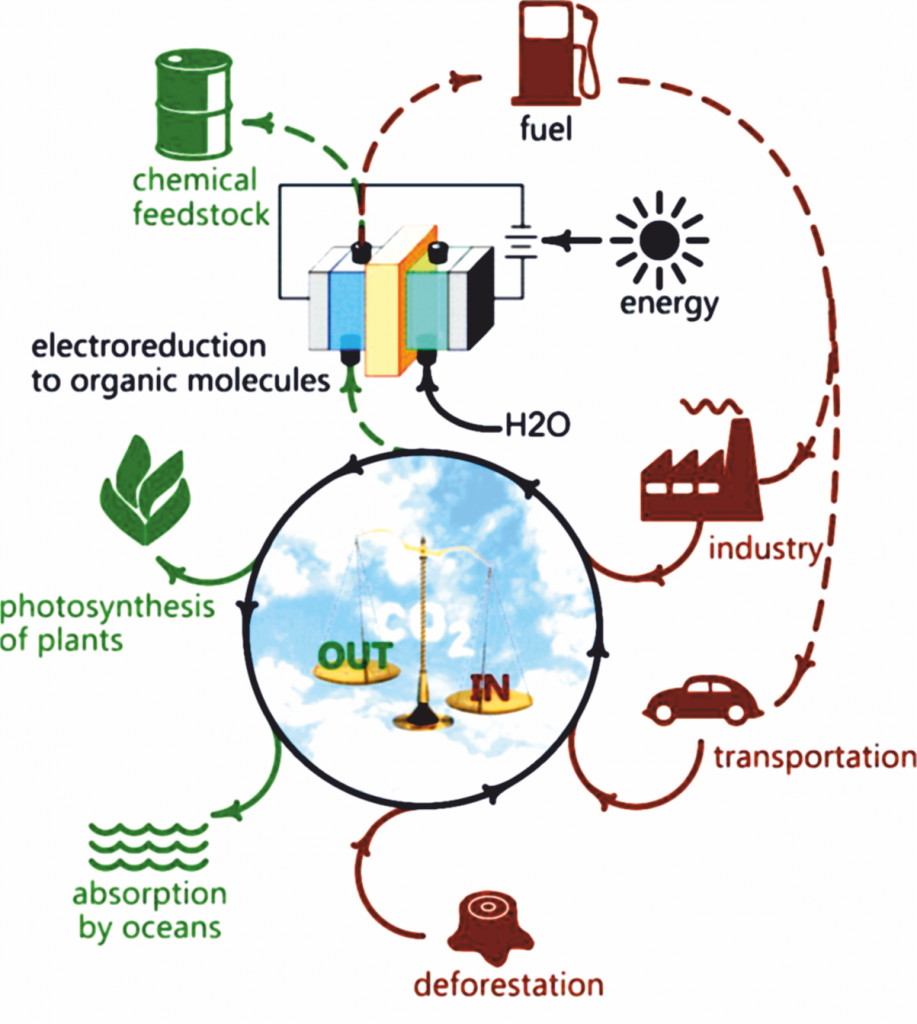 Among these technologies, CO2 reduction deserves particular attention since it can turn CO2 into high density fuels or other products with high added value. In particular the electrochemical reduction of CO2 (denoted as ec-CO2RR) into products of higher value such as methanol, ethanol or other useful feedstock chemicals (ethene, CO/H2 (syngas), formic acid) has attracted tremendous interest over the last decades in both, fundamental science and in industry. Such CO2 electroreduction would offer the unique chance to contribute to the closing of the anthropogenic CO2 cycle, in particular when using the surplus of renewable energies originating from solar, wind and hydro sources (so-called power to X concept).

As an example the figure below shows Cu foam catalysts deposited on a Cu mesh support. The pore structure of the Cu foam evolves as function of the deposition time. Products of the CO2 conversion are typically detected by on-line gas-chromatography (GC: volatile products such as H2, CO, CH4, C2H4, C2H6 etc.) and ion exchange chromatography (IC: non-volatile products such as formate, acetate etc.).

Not only the actual performance of the catalyst is of great interest but also its long term stability under reactive conditions. The catalyst degradation behavior is typically studied in our group by means of so-called identical location (IL)-SEM (scanning electron microscopy) and operando Raman spectroscopy.

The CO2 research of the Interfacial Electrochemistry Group is associated to the Swiss Competence Center for Energy Research (SCCER) Heat and Electricity Storage (http://www.sccer-hae.ch/).